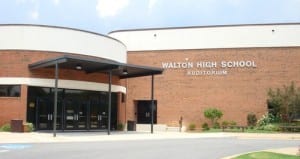 area of Marietta, Georgia. It is a charter school in the Cobb County School District, a School of Excellence and one of the top schools academically in Georgia. It is also one of the larger high schools in the East Cobb area. In 2009, there were 2,592 students enrolled at Walton High School, along with 162 staff members.

For many years Walton has been among the top high schools in Georgia in SAT scores. In 2006, almost 800 Walton students took over 1,800 Advanced Placement exams, making it the school with the greatest number of test-takers in Georgia. Walton was also 1 of 6 featured “Outstanding American High Schools” out of 96 total by U.S. News & World Report in 1999 because of its high parental involvement and overall high level of achievement. Additionally, Walton was ranked 109 in Newsweek’s 2008 “America’s Top Public High Schools” article for the number of Advanced Placement courses taken by students at the school as well as other critical factors. In 2011, Walton was ranked 67 by Newsweek based on new factors: graduation rate (25%), college matriculation rate (25%), AP tests taken per graduate (25%), average SAT/ACT scores (10%), average AP/IB/AICE scores (10%), and AP courses offered (5%).

Walton has been a Georgia School of Excellence since the program’s creation in 1984 and in the same year was recognized as a National Blue Ribbon School of Excellence. Walton became a charter school in 1998. This charter, renewed in 2003 and 2008, has allowed Walton to alter and transcend certain regulations the state school board put into place to further academic and extracurricular success.

Walton’s campus resides amidst several suburban neighborhoods, and has undergone various renovations and expansions over the years. The current school consists of a new G Hall and recently renovated B Hall lying on opposite ends of the school, while the Technology Wing (T Hall) remains relatively unchanged after many years. A new rotunda entrance was added at the same time as the B Hall renovation, and the cafeteria was expanded.

Outside of the building, the campus includes football, baseball, softball, and soccer fields, as well as tennis courts. The football and baseball fields are often referred to as Raider Valley and Raider Mountain, respectively, due to their elevation below and above the school. In 2005, the bleachers for the football field were remodeled to be covered with metal, rather than concrete

Walton High School contains about 2,800 students in grades 9–12, making it the 4th-largest school in Cobb County. The class of 2012 has 680 students in its class. The class of 2006 contained 572 students, 95% of whom enrolled in a 4-year college or university. The ethnic composition of the school is approximately 79% white, 15% Asian, 4% black, and 2% Hispanic. The average income in the area is over $140,000. These figures are at least partially due to the many families that move to the district primarily for the educational opportunity.

Most Walton students take 6 classes a semester, making 7 periods a day, including 1 lunch period usually either 3rd, 4th, or 5th. Some students opt to forgo lunch, or “audit,” in place of another academic or elective class. Seniors are allowed the option of “Minimum Day” in which students may only take 5 classes (dropping a lunch period, as well) and leave to go to their occupation outside of school. Also, homeroom, or “advisement,” is between 1st and 2nd period instead of before all classes like in most high school schedules.

Students and parents are also given access to grade, attendance, and behavior reports and updates online at the school website. This, along with the already large parent participation in school activities, organizations, and events, provided for even more parental involvement in each student’s education.

Walton has received national press attention for the intensity of the student attitudes; the students often taken an extra class before school (“zero period”), and every year, some take as many as seven APs, often skipping lunch to do so. A 4.28/4 is commonly the GPA cutoff for the top 10% of the class, and a 3.9/4 for the top 25%.

Walton gained charter status in 1998, which was renewed in 2003 and 2008. Walton’s administration has made several changes to the school’s policy and schedule, among other areas, through this. One of the changes is the Walton Governance Council, which replaces the original local council in matters pertaining to the maintenance of the charter and its renewal every 5 years. This larger and more diverse council was also a change given by the charter itself to better represent its stakeholders (students, parents, teachers, administrators, and others).

One of Walton’s most noticeable changes is the Walton Enrichment Block, or WEB, which shortens classes one day a week (usually Wednesday) to provide students several hours to complete missed assignments, receive individual instruction, or simply leave early. WEBs only occur on weeks without any other events such as county-mandated teacher workdays or early releases.

Walton also allows students to take additional classes before and, if the new charter renewal petition passes, after school. Many students today take advantage of 0 Period to take an additional course each day before the normal school day begins. 0 period is also included the “Flex Schedule,” in which students may leave after 6th period by taking a 0 period class, thus still giving six classes and a lunch period. The 8th period adopted in the 2008 charter will likely serve similar purposes as 0 period.

The use of online grade, attendance, and discipline reports on the school’s website is another long-standing addition. Parents are encouraged to visit the site to keep track of their student’s progress and to maintain overall parental involvement in each student’s education. Other changes to Walton’s policy include using textbooks other than those specified by the county and having local control over funds given by the state.

One other significant change Walton makes, though not specifically regulated by the charter, is known as the Incentive policy. If a student has A averages (90–100%) in any classes, he or she may exempt the final exams at the end of the semester for any two of them. The same is allowed if the student has a passing grade and two or fewer absences in that class. Tardies are also included in determining incentive, with three tardies equating to one absence. The student will also receive an additional 10% on each final taken with the attendance incentive.

The petition adopted in 2008 also proposes a new method of evaluating teachers called the “Collaborative Growth Model,” a release from mandated End of Course Test days that conflict with AP exams, and recognition of Project Lead the Way courses as being worthy of half a quality point towards a grade point average.

For students in the school, many clubs, groups, and societies exist for a variety of interests. Walton has, for example, a Beta Club, a National Honor Society, and a Habitat for Humanity group. It also has Young Democrats, Young Conservatives, and a Future Physicians Club. Aside from general interest groups, service clubs, and honor societies, students may participate in various sports, fine arts, and academic organizations.

“Raider Valley”, the home field of the Walton Raiders, went through some major renovations during the summer of 2010. The football team raised enough money to build a whole, new stadium. The Raiders put in a new football field, along with a top of the line jumbo-tron score board. The renovations took place all summer and the new turf field will be beneficial to all outdoor activities.

Walton’s band and orchestra are composed of over 400 students. Both consistently receive superior ratings at District Large Group Performance Evaluations (LGPE). In 2002, the orchestra performed in New Orleans at the National School Board Association Convention. The orchestra completed a 10-day concert tour of Austria in 2004 and another tour of Prague, Vienna, and Berlin in 2007. The Walton Philharmonic performed at the Midwest Clinic in 2005, the second time in its history, and two chamber music groups performed in 2008 as the first high school string ensembles to do so. The orchestra continues to break tradition in ways that progressively enhance the image of a high school orchestra. The addition of electronic instruments to the orchestra and a program in which students are encouraged to attend concerts blending rock and orchestral music – such as the upcoming performance of The Machine with the Atlanta Symphony Orchestra.

The band is under the direction of Mike Back, an accomplished musician in Drum Corps International for the Spirit of Atlanta’s drumline. Jeff Pollock is also an accomplished musician and is the assistant band director. The band at Walton participates in marching competitions as well as the annual District LGPE. In 1998, the Walton Marching Raider Band performed in the Macy’s Thanksgiving Day Parade. The Walton Winter Guard won 1st place at Winter Guard International Championships in 2001. Last year, the Walton Indoor Percussion was created and placed 1st at the 2008 SAPA Regional in Macon, GA. This year, the Walton Winter Guard and the Walton Indoor Drumline combined, with their show entitled “Balance,” and competed in the WGI World Championships. The marching band performed in the Tournament of Roses Parade on January 1, 2003. The band marched in the Rose Bowl again on January 1, 2010. In 2005, it performed in front of the USS Missouri in Hawaii and placed 3rd in the Bands of America Regional Competition in Atlanta. In 2006 the band placed 21st at the Bands of America Grand Nationals Competition in Indianapolis. In 2008 and 2009, the band placed 6th in the Bands of America Super Regional’s in Atlanta. Band Website As of 2010 the Walton Band has also received the Sudler Shield Award.

Walton’s  is composed of four choirs that have performed in the cathedrals of St. Bartholomew and St. Patrick in New York City and the Notre Dame Cathedral in Paris, France. In Spring 2002, a select choir performed in Carnegie Hall. They have been featured on a local FOX station and have performed in many events around the city. The men’s ensemble performed at the Georgia music educators association meeting in 2007 and the top chorus will be performing at the meeting in 2010. Walton’s nationally acclaimed tour choir will be performing in St. Peter’s Basilica in the spring of 2010.

The Walton Academic Bowl team has won the GATA varsity state championship from 2004 to 2006. It has won numerous prestigious awards and its members were National Champions in 1995. The team also consistently wins the annual High Q competition.

The Math Team has won the state championship 9 times including the three most recent tournaments. Additionally, the team has won numerous tournaments and awards in the past few years. Many of the members are also members of the Georgia ARML team. The Walton MathFest, a math tournament and conference for high school students is hosted by the team in the spring.

Other academic extracurricular include Debate Team and the Raider Script (magazine).